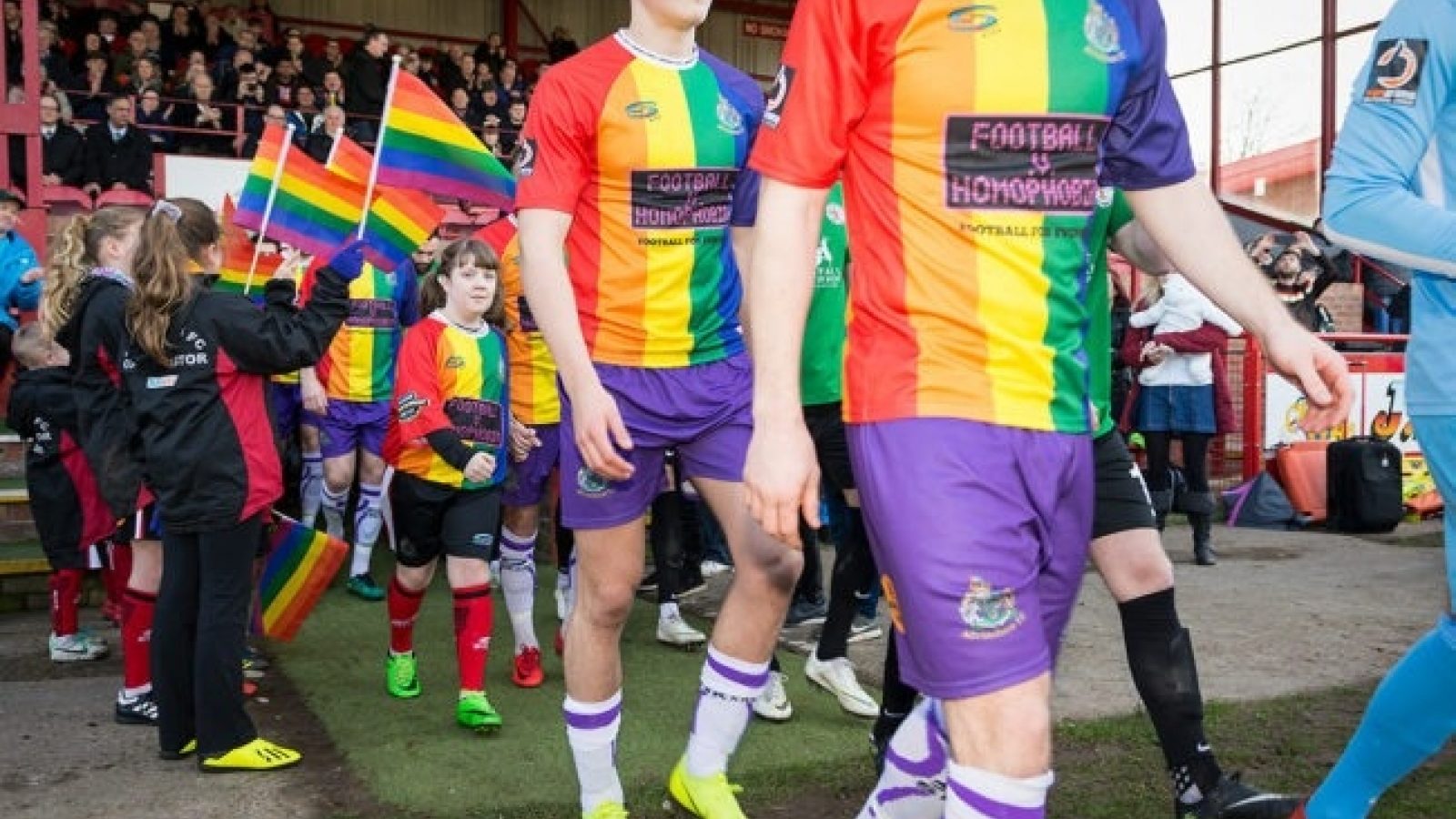 When Blackpool forward Jake Daniels came out as gay a few weeks ago, it was a landmark moment in sport. Jake became the first openly gay professional footballer in the UK since Justin Fashanu in 1990. For context, that’s just a shade more than twice the length of Shaun Densmore’s Alty career.

If you’re not part of the LGBT community, or you don’t know much about what it’s like to be a sexual minority, the significance of this announcement may pass you by. Jake’s bravery really can’t be overstated.

Hopefully, Jake, aged 17, has a long and illustrious career ahead of him. Sadly, he will be met with abuse. From players, from fans in the stands and even from figures in the media. This is going to be hard for him.

It’s already happening online. Jake’s Wikipedia article is currently locked down due to persistent vandalism. Check the comment section on any article about Jake and marvel at the ignorance and cruelty of many internet users.

Jake knows this. Yet he is brave enough to throw himself into a very difficult situation.

Still, the reaction to Jake’s coming out is much better than I would have expected in past years. One small thing that jumps out at me is that the news stories about Jake on the big football Facebook pages tend to be marked with a heart react by readers, as opposed to the usual laugh react which meets most football-related articles on minority issues.

Big-name players like Harry Kane have offered Jake their backing and he has support within his own dressing room. It’s small gestures like this that must make things tolerable for a young man in a largely hostile environment.

Having attended Alty games regularly with my partner from around 2008 to 2018 (before life got in the way and we moved away from the area), I can happily say that we’ve experienced very little abuse during our time at football games. The only incident I can remember was a person shouting slurs at us on the way to an away game in North Ferriby.

In fact, people at Altrincham Football Club have always been incredibly supportive. I remember a conversation with Keith Davey, who ran the away end snack bar for many years before he sadly passed on in 2013. He asked if I was in a relationship with my partner. When told yes, he said he thought it was nice.

Alty’s famous rainbow kit initiative in 2019 was an astonishing move from the club. It showed people from around the world that a club was willing to make LGBTQ people welcome at games. Since then, everyone from Partick Thistle to Paris Saint-Germain have incorporated rainbow elements into their kits. The Alty initiative began a chain reaction of similar worthy projects.

In 2019, I went on BBC Breakfast with Bill Waterson to discuss the rainbow shirt initiative. When asked when I expected to see a professional player come out as gay, I replied that the environment didn’t exist for it to happen.

I’m delighted to be proved wrong. Still, these things don’t happen in a vacuum. Would Jake have felt comfortable coming out 10 or 20 years ago? I don’t think so. Jake mentioned he was inspired by openly gay footballers abroad and in non-league. Slowly but surely, society is becoming more tolerant.

I’m proud that Alty were pioneers in offering support to the LGBT community. I believe it was a significant step in creating a more welcoming environment in football. At the Football vs Homophobia game, lots of people from LGBTQ groups around Manchester came to Alty for their first ever football match. I hope they found the club to be an inclusive and welcoming place.

And it’s great to see the club hasn’t rested on its laurels. The AltyForAll initiative continues to welcome people of all stripes to watch the boys in red and white stripes.

But it’s a mistake to believe the fight for equality is over. If you care about LGBT people, or indeed your fellow human beings and football supporters, please don’t allow yourself to believe the battle against discrimination is won.

As part of the amazing rainbow kit initiative, a game was arranged between Alty’s supporters’ team and Village Manchester, a gay-inclusive team representing the city’s historic Gay Village. I played half an hour at left-back for the Village team!

If ever a game were to be played out in a spirit of good fellowship, this was it. Sadly, the game was halted for some minutes after one of the Altrincham supporters’ players called a Village player a homophobic slur.

Apologies were made and the game was played to a conclusion. And it should be noted the vast majority of the supporters’ team represented their club well. But it shows how much work remains to be done.

Society is filled with discrimination. But we’re slowly increasing tolerance levels across the board. When the club announces diversity initiatives, please get behind them. Let’s ensure everyone, no matter their background feels welcome at football.

Remember: statistically speaking, you’ve been cheering on members of the LGBTQ community for years or standing beside them on the terrace. It’s hardly likely that of the thousands of names to have represented Alty over more than 100 years, all of them were straight.

Do your part. If you hear someone use a slur against a player, let them know it’s not on. Don’t describe something as “gay” because you don’t like it, or describe a player going down under a challenge as a “fairy”.

These words might sound innocuous, but they’re used to discriminate against people every day.

Above all, please don’t say things like “who cares? It doesn’t matter if you’re gay, straight, or whatever.” Unfortunately, it does matter. No one is going to be discriminated against or physically attacked for being straight.

Perhaps someday, it won’t matter if a football player is gay. We all need to work together to create that future.

Jonny grew up in Timperley and became an Alty season ticket holder in his teenage years. He is a former Radio Robins commentator and editor of the women's team programme. He now lives in Glasgow and works as a freelance writer, covering history, travel, sport and a variety of other topics.